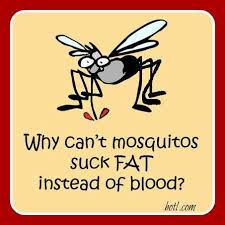 If I’m going to be bitten and have my blood sucked out with a fiendish passion, I really would prefer a tall dark handsome vampire who wants to shower me with lavish gifts and offer amazing sex. The fact that I have no less than seven mosquito bites while I remained fully clothed is a testament to their tenacity. One went through my jeans and bit me right on the ass. So now I will perfect my female caveman, and figure out ways to scratch my derriere in public. Who said the life of a single woman was boring? Oh wait, that would be me.

So the 100 first dates that I was going to blog about has turned into 1 first date since that post, and then a second… and then a third. For the third, we went to the waterfront in town and walked around while watching fish jump in the moonlight, and listened as ducks squawked obnoxiously. I had a close encounter with a spider, but my date saved me. He saved me twice because I’d of fainted if I realized that a spider had actually touched me. Just the thought of those eight legs and creepy eyeballs freaks me out. Bugs aside, it was a romantic evening.

As the night wound down, we sat in my car and listened to music, where he sang along to some of his favorite songs. (This of course, was after we’d already established the date had to end because we both had to get up early.) The dates we’ve had were simple, there was no grand gesture, no surprise flowers that make me end up in the ER, its two people spending time together and the time extending for hours. It’s fun, non-threatening, and not over whelming. The biggest concern I have each time we are together is which jeans will make my ass look great, and which bra makes me perky. Even my nails are painted. Well it looks like a toddler did it, but hey, they’re pink. When I became a financially stable adult human, I’m getting a manicure and pedicure every single week until I’m too old to enjoy pretty things. 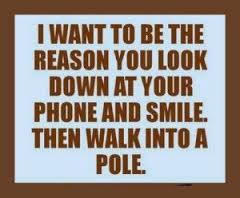 I’ve lived in this mode of survival for so long that living in the moment is foreign to me. It was unexpected when in waltzes in this man, who looks at me with an intensity that I can relate to. It’s unnerving but I think he sees me. Not the ‘me’ I share with the world, but the ‘me’ I actually am. He didn’t even mind that I blogged about our dates, which made me smile because most people aren’t all that fond of being exposed through the thoughts of another.

So a little over a week, 3 dates, mosquitos and spiders. My toes hurt from cute shoes, my ass has a bug bite, and I’m having the time of my life. This weekend is my last weekend off for a while. Unfortunately he’ll be out of town, so I’m going to go out and sing. This much happiness contained in one body cannot be healthy, so I’m going to exhaust myself with karaoke.